This month’s theme for the Year of Food and Drink is ‘Summer Fruit and Berries.’ I think we can all agree that I’ve become adept at making tenuous links between these themes and soup, so I hope you enjoy July’s offering. 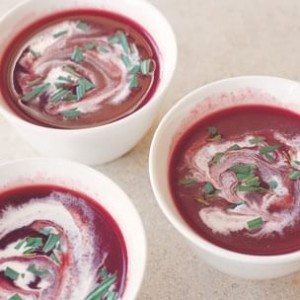 Let’s rewind a little to the start of the month. Several of Union’s staff were away on holiday, travelling across Europe on trains, planes and automobiles. Upon their return, Dumbo’s Lieutenant, Floss, had a soupy curiosity to share. She had ventured to Budapest and had heard talk of Hungarian Fruit Soup, although unfortunately hadn’t been able to try any.

After a little discussion, we at Union felt fruit soup wasn’t something we could bring to the masses. Each year, we’re asked about cold soup, which we haven’t sold since our first summer – we offered the same soup hot and cold and no one wanted it chilled. We’ve found that generally if you fancy soup for lunch it’s because you want something hot. And so along the same lines, we reckoned that if you’re after soup it’s because you want something savoury. Fancy a fruity flavour and you’re going to grab a juice from Tupiniquim instead.

But in your own home, things are different. The recipes I’ve looked at for Hungarian Fruit Soup would make great dinner party palate cleansers, desserts or perhaps even as a slightly radical accompaniment to a BBQ, if you imagine a combination of slightly sour dark fruits paired with rich, smoky meat.

As far as I can see though, a fruit soup is like a fancy compote. It basically constitutes choosing a fruit, boiling it with sugar, blending it and stirring through a little yoghurt or sour cream. Maybe you go crazy and add some lemon zest, a stick of cinnamon or a vanilla pod. Apparently strawberries benefit from a drop or two of rosewater.

But then I stumbled on something a little more interesting. No, not Polish strawberry soup with semolina pasta through it (make of that what you will) but a sour cherry soup with shallots, red wine and tarragon. If you were looking to avoid something overly sweet mid-meal I really think it would work. You could also easily substitute the cherries for Scottish blackcurrants or blackberries, which are in season at the moment – you can pick your own berries at Belhaven Fruit Farm and Cragies Farm, both near Edinburgh. Just grab a basket, fill it up and pay for the weight of your fruit. So who fancies giving it a go?

If you feel inspired to make a fruit soup, we’d love to hear from you! Post a picture on our Facebook page or Tweet us. Better still, bring in some for us to try and we’ll swap you a portion of whatever we’ve got for sale that day. What a berry good deal.

This is the seventh in a series of blogs reflecting on the monthly themes of the Year of Food Drink in Scotland. Read May’s on whisky and June’s on the future of food.